As a teen-aged "autophile" with more spare time than sense, I did my best to push these cars to their limits on the streets of Austin, Texas.  But these cars, though impressive in their own right, are no Carrera S, and Austin’s Missouri-Pacific Highway (MoPac) is no Autobahn.

The Porsche 911 Carrera S is a car that needs no introduction, so let’s skip the part where we discuss its 400hp, ~ 4 second 0-60 mph time, and 188 mph top-speed.  The car is simply stunning.  Our test car was Anthracite Brown Metallic, a medium charcoal gray with just enough bronze to make you look, well, thrice.  And while the 18-way power seats might allow you to lounge for cruising, they willingly oblige when asked to posture (and secure) you to experience the Carrera’s legendary performance.

Just starting this Porsche evokes a visceral reaction; you can feel the car.  At idle and inner-city speeds, the Porsche’s natural note softly (yet persistently) reminds you she is ready when you are, while remaining sufficiently melodic to bring an envious smile to your neighbour's face.  She’s modest, too; in-and-around the city, she doesn’t hesitate to use all seven gears (shifting seamlessly, I might add) before reaching 70 mph.  But escort her to the Autobahn, and she sings an entirely different tune. 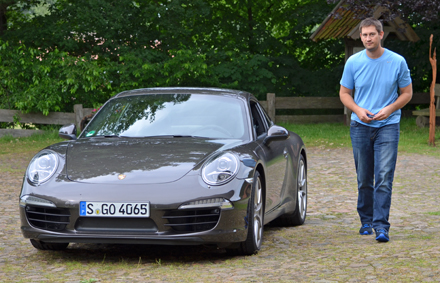 By the time I first merged onto the A31, heading north from Emsbüren, my only familiarity with the Porsche had been derived from the ten minutes it took us to get through town.  It didn’t matter, though; she’s kind to strangers.  Traffic and weather both clear, we decided to skip the small talk and get to know each other a little better.  She asked me to hammer the gas pedal.  I complied.

The sensation cannot be expressed by written word.  Rather, only a photograph of the smile on my face – which stretched from one ear to the other as the 400 horses launched us across the 130 mph mark – would suffice.  When my passenger, Gerd Kebschull, switched the beast (without warning) into Sport-Plus mode, the smile turned into sheer laughter as the Porsche roared like a lion, downshifted, and effortlessly catapulted us to just over 160 mph (a new personal best).  At that speed, lanes don’t really exist; there’s only the tone of the car, the adrenaline in the veins, and the blank canvas of Autobahn ahead.  And it is marvellous.

For me (and every other guy I know), driving a Porsche on the Autobahn has always been a dream.  Now a reality, it pleases me to report that the Carrera S did not disappoint.  Truth be told, the Carrera S was a joy to drive no matter what the context.  Handling and acceleration were unwavering and as smooth as one would expect from a car of this calibre.  Acceleration from a stop was swift, stable, and secure, making it difficult to decide when to lay off the gas.  Though too short-lived, this was a rendezvous I will never forget. 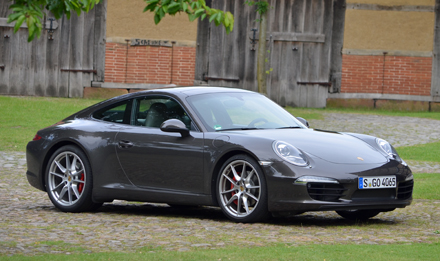